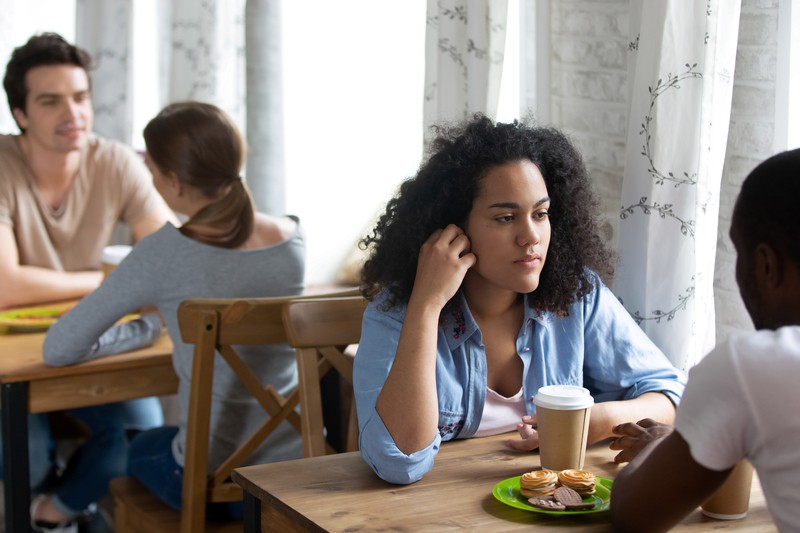 Three years ago, Lauren Bryant was walking across Appalachian State University’s campus with several other Black students when they were verbally assaulted with a racist tirade.

“This guy in a pickup truck stopped at the light, rolled down his window, and just started calling us a bunch of N-words,” she recalled.

It wasn’t the only time Bryant has had an experience like this at the overwhelmingly white campus in Boone, a town in one of North Carolina’s most conservative regions. Whether it’s the ubiquity of Confederate flags, Ku Klux Klan members handing out literature, or a parade of pickup trucks flying flags in support of President Donald Trump, she believes they’re all intended to signal that students of color are unwelcome there.

Black students at predominantly white institutions report everything from instances of thinly veiled racism, homophobia, and sexism to outright racial hostility and intimidation.

Experiencing such incidents has consequences that go well beyond feeling uncomfortable. A growing body of research has documented the detrimental health effects of both interpersonal and structural racism. The Centers for Disease Control and Prevention notes that centuries of racism have had a profound and negative impact on the mental and physical health of people of color. The American Public Health Association calls racism a barrier to health equity and a social determinant of health akin to housing, education, and employment.

Racist incidents can take a toll on students’ overall health and well-being, undermine their self-confidence, and affect academic performance, said Dr. Annelle Primm, senior medical director for the Steve Fund, a nonprofit focused on supporting the mental health of young people of color.

“These kinds of feelings go hand in hand with students at predominantly white institutions, where they may feel isolated or like they don’t belong,” she said. “The experiences are associated with issues such as depression, anxiety, and difficulty concentrating or sleeping.”

A UCLA study published in the journal Pediatrics in 2021 shows that the problems aren’t necessarily transitory. Young adults who experience discrimination are at higher risk for both short- and long-term behavioral and mental health problems that are exacerbated with each new incident.

For a variety of reasons, students of color are not getting the kind and amount of help they need. A recent University of North Carolina-Chapel Hill study of first-year college students found that Black students had the highest increase in rates of depression. However, a study in the Journal of Adolescent Health found that treatment use is lower among students of color relative to white students, even when controlling for other variables. This is consistent with a 2020 report from the Steve Fund that said students of color are less likely than their white peers to seek mental health treatment even though white and Black students experience mental health issues at the same rate.

College campuses are having trouble recruiting enough therapists to meet the mental health needs of students overall. And few predominantly white colleges employ counselors and mental health professionals who are representative of the racial, ethnic, and cultural diversity of the students.

This can be problematic for patients of color in any setting who doubt white counselors can provide culturally competent care, which acknowledges a patient’s heritage, beliefs, and values.

When Daisha Williams spoke to a white counselor outside of campus about being alienated from her mother’s side of the family for being biracial, her pain was trivialized: “She was, like, ‘Sorry that happened. That sucks. They really missed out.’ And that was it.”

The history of racism in the fields of psychology and psychiatry makes many Black people leery of seeking help. Last year, the American Psychiatric Association apologized for the organization’s “appalling past actions” and pledged to institute “anti-racist practices.” Months later, the American Psychological Association issued its own apology.

But even a Black counselor may not be enough to overcome reluctance. In a joint survey conducted by the Steve Fund and the United Negro College Fund, 45% of students at historically Black colleges and universities said they would not speak to a mental health professional if they were in crisis.

Primm said a student’s background and belief system may be a factor. “They may have been raised to ‘put it in God’s hands’ or may be told that they could overcome these feelings if they prayed hard enough,” Primm said. “Certainly, prayer and religious activity are important and helpful for mental health, but sometimes you may need some additional support.”

Black students account for nearly 4% of the more than 18,000 undergraduates at Appalachian State, and Black residents make up fewer than 3% of Boone’s population. Bryant, the programming chair for the university’s Black Student Association, believes that having a university with so few Black people— in a town where Black residents are even scarcer — emboldens those who commit racist acts.

Bryant was well aware of the demographics of the school and the region before she arrived. But during a campus tour, university representatives assured prospective students that they valued diversity and would ensure that Black and other students of color felt as if they belonged.

“We were under the impression that they would make sure we are supported, but the reality of how things really are changed that dynamic,” she said. “We did not expect the amount of fight we’d have to contribute towards things that might affect our education.”

And sometimes the racism the students face is more subtle than hurled epithets but still deeply unsettling. In 2017, Williams said, she eagerly anticipated discussing Ta-Nehisi Coates’ essay “The Case for Reparations” in one of her Appalachian State classes, but the conversation soon became upsetting. A white student asserted that any residual economic or social inequality resulted from Black people’s lack of initiative, not the nation’s failure to atone for historical wrongs.

“He kept saying extremely offensive things like ‘They should just work harder’ or ‘They should try to better their lives and educate themselves,’” Williams recalled. “At one point, he made some comment about lynching. Once he said that, I just got up and left.”

Williams was especially disturbed by what she saw as the professor’s encouragement. “Rather than saying, ‘You’re making the students of color feel unsafe and unwelcome,’ she kept saying, ‘Elaborate on that.’”

Although institutions cannot control or eliminate these occurrences, they bear responsibility for how they respond. When asked about what happened to Williams and Bryant, Appalachian State Associate Vice Chancellor Megan Hayes called the incidents “abhorrent” and said the university “is committed to fostering an inclusive, safe and supportive environment for all students, faculty, and staff.”

Still, such incidents continue to happen nationwide. A white Georgia Southern University student gave a class presentation on white replacement theory, which has been linked to white supremacist ideology. When Black students complained, the university defended the presentation as free speech.

At Rhodes College in Memphis, Tennessee, pro-Nazi postings were directed at Black students and a banana was taped to the dorm room door of two Black male students. At Northern Illinois University, the N-word was spray-painted on the Center for Black Studies building. A student at the State University of New York’s College of Environmental Science and Forestry posted a video showing two men firing guns at a tree as one yells, “This is what we do to n——.”

In the wake of George Floyd’s murder in 2020, Appalachian State student organizations spoke out and led protests against what they deemed as the oppression and trauma that Black and other students of color routinely encountered. Marches through campus, into downtown Boone, and to the Watauga County courthouse drew condemnation and threats of arrests.

But the backlash and vitriol often directed at students who engage in social justice activism can take its own mental health toll. The work is often all-consuming. “It gets challenging,” Bryant said. “We shouldn’t have to advocate against things that should never have happened in the first place.”

Ebony McGee, an associate professor of diversity and STEM education at Vanderbilt University in Nashville, Tennessee, cautions students to jealously guard their emotional well-being. “The best way students can protect their mental health is realize that they can’t change the system,” McGee said. “The best way you can support racial activism is to get your degree, because then you’ll have greater power and a greater voice within your community.”

KHN (Kaiser Health News) is a national newsroom that produces in-depth journalism about health issues. Together with Policy Analysis and Polling, KHN is one of the three major operating programs at KFF (Kaiser Family Foundation). KFF is an endowed nonprofit organization providing information on health issues to the nation.